Several experiments to improve National Weather Service severe weather warnings are conducted in the spring in the NOAA Hazardous Weather Testbed as part of the annual Experimental Warning Program.

During the EWP Spring Experiment, the GOES-R Proving Ground conducts a demonstration of recently developed experimental products and capabilities alongside a forecaster’s standard operational data and products. These experimental products are associated with the next generation series of geostationary and polar orbiting satellites. This experiment was initially designed to increase forecaster familiarity with future GOES-R capabilities that would be available across the NWS. In this way, EWP forecasters were readied for receipt and use of the GOES-R data prior to the launch of the first satellite in the series, which occurred on November 19, 2016. Now that the satellite is operational, the focus of the experiment shifted to evaluating the products and capabilities of the satellite in a real-time environment and providing feedback to the product developers and to the NWS. Additionally, feedback received from participants each year is utilized in the continued development of GOES-R/JPSS algorithms to improve the products for future operational use by NWS forecasters. The second of the GOES-R series of satellites (GOES-S) launched on March 1, 2018.

The lightning jump algorithm is also evaluated during the SWP. In severe storms, rapid increases in lightning flash rate, or “lightning jumps,” are coincident with pulses in the storm updraft and typically precede severe weather, such as tornadoes, hail, and straight-line winds, at the surface by tens of minutes. The GOES-R Geostationary Lightning Mapper, the GLM, provides a general path to operations for the use of continuous total lightning observations and the lightning jump concept over a hemispheric domain. SWP forecasters evaluate a gridded sigma-level based lightning jump product on a CONUS scale in real time.

During the weeks of the Spring Experiment, forecasters assess a new tool using rapidly-updating high-resolution gridded Probabilistic Hazard Information, or PHI, as the basis for next-generation severe weather warnings. This experiment is part of a broad effort to revitalize the NWS watch/warning paradigm known as Forecasting a Continuum of Environmental Threats (FACETs). The major emphasis of the HWT PHI experiment is on initial testing of concepts related to human-computer interaction while generating short-fused high-impact Probabilistic Hazard Information for severe weather. The long-term goal of this effort is to move the refined concepts and methodologies that result from this experiment into Hazard Services, the next generation warning tool for the NWS, for further testing and evaluation in the HWT prior to operational deployment.

Emergency managers play a critical role in distributing NOAA National Weather Service warnings to people using a variety of methods, such as activating sirens, notifying schools, hospitals and other critical services, activating an emergency alert system, cable television interrupt, or a reverse emergency call-out system. Since 2015, emergency managers have played an integral role in the testing, evaluation, and feedback during the development of probabilistic hazard information within the NOAA Hazardous Weather Testbed. They provide feedback on their interpretation of experimental probabilistic forecasts generated in the HWT from the PHI Experiment and the Experimental Forecast Program. This feedback is used in conjunction with feedback from forecasters and broadcast meteorologists to refine how the uncertainty information is generated and disseminated.

Beginning in 2016, broadcast meteorologists were added to the Integrated Warning Team along with the emergency managers and forecasters. As intermediaries between NOAA National Weather Service forecasters and the public, broadcast meteorologists serve a critical and complex role in the communication of weather warnings. As participants in the PHI Experiment, broadcasters performed typical job functions under a simulated television studio environment as they receive experimental probabilistic advisories and warnings from NWS forecasters. Researchers study how broadcast meteorologists interpret, use, and communicate this probabilistic information. Decisions of interest include when to run “crawls,” post to social media, interrupt commercials, and interrupt programming. This feedback is used in conjunction with feedback from emergency managers and forecasters to refine how uncertainty information is generated and disseminated.

The Multi-Radar Multi-Sensor Hydrometeorology Testbed - Hydro experiment, also known as HMT-Hydro, is a part of the United States Weather Research Program through the Hydrometeorology Testbed that runs from June 25 to July 20, 2018. During the HMT-Hydro experiment, forecasters and hydrologists from the NOAA National Weather Service will work with NOAA National Severe Storms Laboratory research scientists to assess new technology and techniques to improve the prediction and warning of flash flooding. In particular, NWS participants will evaluate new probabilistic hydrologic modeling concepts and output within the Flooded Locations and Simulated Hydrographs system that could help convey the uncertainty of the flash flood threat. NWS participants will also evaluate high resolution precipitation forecasts from the NSSL Warn-on-Forecast project and the addition of these forecasts into the FLASH system. Feedback from participants will allow NSSL research scientists to identify how these precipitation forecasts could influence the warning decision making process, including the potential for increased warning lead time. The HMT-Hydro experiment runs in conjunction with the Flash Flood and Intense Rainfall (FFaIR) experiment at the Weather Prediction Center to collaborate on the short-term forecasting of flash flooding for both a national and regional scale. 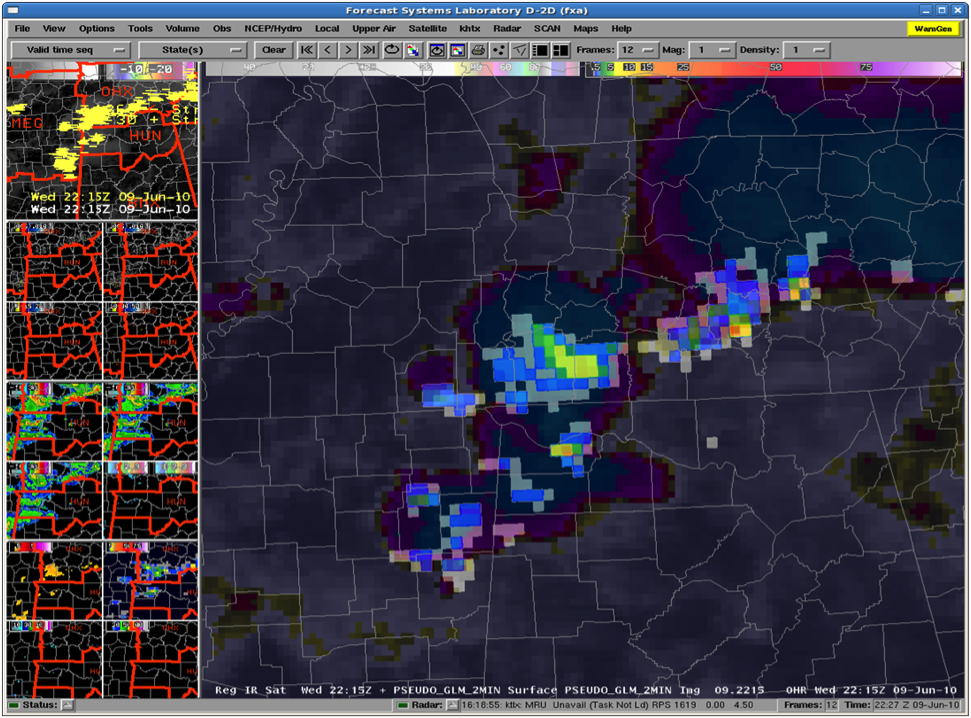 During the Spring Warning Project, the GOES-R Proving Ground conducts a pre-operational demonstration of recently developed products associated with the next generation GOES-R series of geostationary satellites. This early exposure is designed to increase forecaster familiarity with future GOES-R capabilities. [+]

During the Spring Warning Project, the GOES-R Proving Ground conducts a pre-operational demonstration of recently developed products associated with the next generation GOES-R series of geostationary satellites. This early exposure is designed to increase forecaster familiarity with future GOES-R capabilities.
Loading the player

During the weeks of the Spring Experiment, forecasters assess a new tool using rapidly-updating high-resolution gridded Probabilistic Hazard Information (PHI) as the basis for next-generation severe weather warnings. This experiment is part of a broad effort to revitalize the NWS watch/warning paradigm known as Forecasting a Continuum of Environmental Threats (FACETs). FACETs is a proposed next-generation severe weather watch and warning framework that is modern, flexible, and designed to communicate clear and simple hazardous weather information to serve the public. (Video only; no sound.) 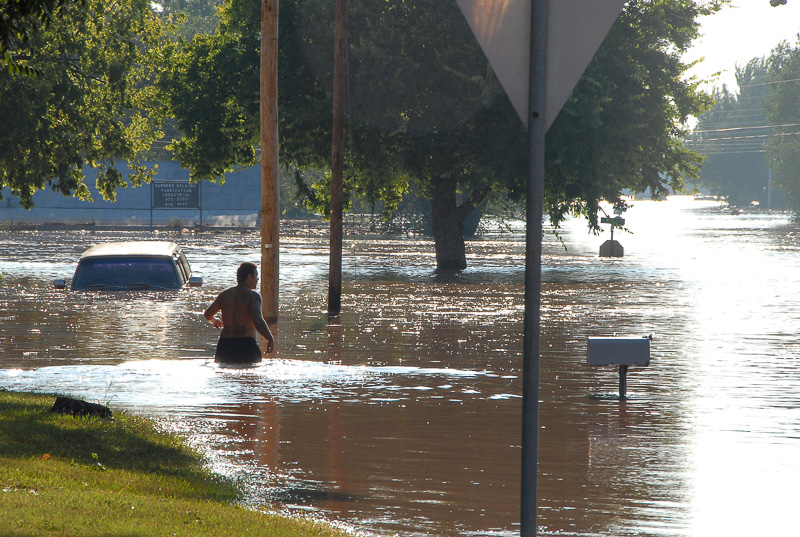 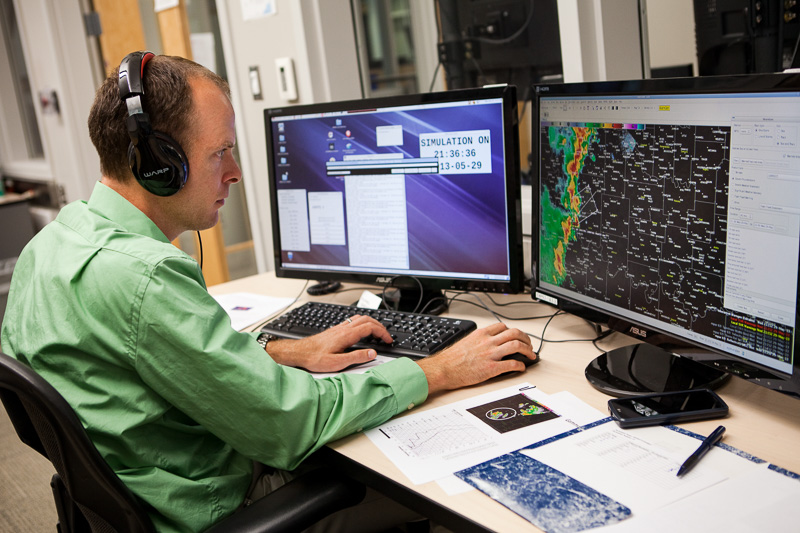